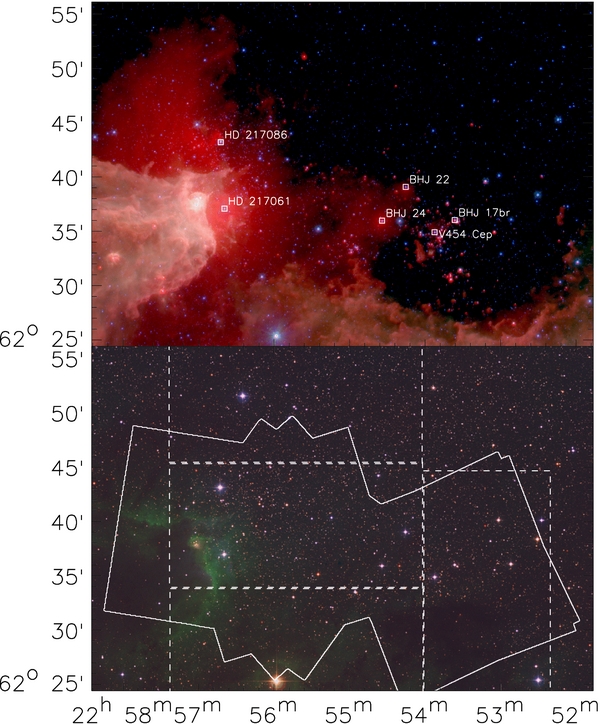 Spitzer Imaging of the nearby Rich Young Cluster, Cep OB3b

We map the full extent of a rich massive young cluster in the Cep OB3b association with the Infrared Array Camera and Multi-band Imaging Photometer System instruments aboard the Spitzer Space Telescope and the ACIS instrument aboard the Chandra X-Ray Observatory. At 700 pc, it is revealed to be the second nearest large (>1000 member), young (<5 Myr) cluster known. In contrast to the nearest large cluster, the Orion Nebula Cluster, Cep OB3b is only lightly obscured and is mostly located in a large cavity carved out of the surrounding molecular cloud. Our infrared and X-ray data sets, as well as visible photometry from the literature, are used to take a census of the young stars in Cep OB3b. We find that the young stars within the cluster are concentrated in two sub-clusters; an eastern sub-cluster, near the Cep B molecular clump, and a western sub-cluster, near the Cep F molecular clump. Using our census of young stars, we examine the fraction of young stars with infrared excesses indicative of circumstellar disks. We create a map of the disk fraction throughout the cluster and find that it is spatially variable. Due to these spatial variations, the two sub-clusters exhibit substantially different average disk fractions from each other: 32% ± 4% and 50% ± 6%. We discuss whether the discrepant disk fractions are due to the photodestruction of disks by the high mass members of the cluster or whether they result from differences in the ages of the sub-clusters. We conclude that the discrepant disk fractions are most likely due to differences in the ages.